Art and the Mexican Revolution 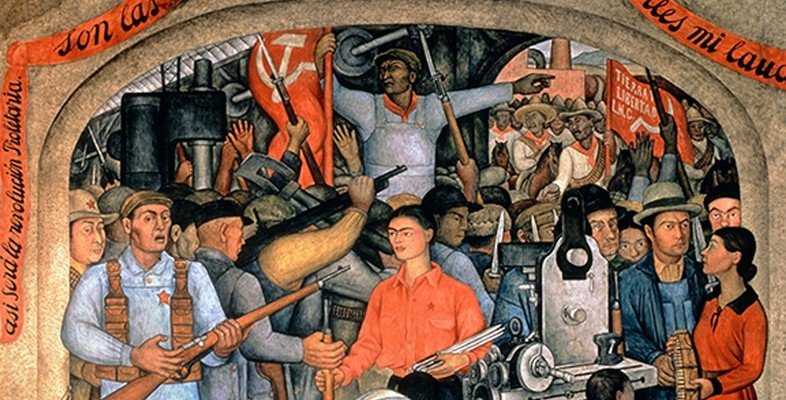 In this course, Art and the Mexican Revolution, you will explore one of Diego Rivera’s key murals which were commissioned by the Mexican government in the period after the Mexican Revolution of 1910-1920. These monumental public artworks, designed to win over the Mexican peasantry and working-class to the new post-revolutionary state, brought Mexican mural artists international acclaim and Rivera was subsequently awarded important commissions in the United States. Yet, due to his commitment to a figurative form of propaganda, Rivera’s reputation suffered during the Cold War period and these Mexican murals are now largely left out of dominant accounts of twentieth-century United States art.

In this course, Art and the Mexican Revolution, you will explore the significance of certain murals by the artist Diego Rivera. While Rivera is now often known (if he is known at all) as the husband of Frida Kahlo, he was, in fact, one of the three major Mexican muralists (alongside José Clemente Orozco and David Alfaro Siqueiros). Together, these artists were collectively referred to as Los tres grandes (the big three) and in the period after the Mexican Revolution of 1910−20, they were commissioned to produce monumental murals in Mexico City.

Figure 1 Diego Rivera, Distributing Arms [featuring the image of Frida Khalo], 1928, fresco, 256 × 358 cm. Secretariat of Public Education, Court of Fiestas, Mexico City, Level 3 south wall. Photo: © 2017. Art Resource/Bob Schalkwijk/Scala, Florence. © Banco de México Diego Rivera Frida Kahlo Museums Trust, Mexico, D.F./DACS 2018.
During the revolution, the Mexican bourgeoisie mobilised the radicalised peasantry and emergent working class to overthrow the dictatorship of Porfirio Díaz who had been installed with the backing of the United States in 1876. And after the violence had subsided in the post-revolutionary period, the government commissioned these murals in an attempt to win over the largely illiterate peasantry to its less than revolutionary political reform programme. North of the border, the Depression decade of the 1930s was marked at either end by two major shows devoted to Mexican art in New York: at the Metropolitan Museum of Art in 1930 and at the Rockefeller-dominated Museum of Modern Art (MoMA) in 1940. These exhibitions framed a period in which artists and intellectuals in the United States looked towards their southern neighbour for an example of a culture which they felt was, in certain key respects, superior to their own. Mexico seemed to offer a model of an agrarian economy, simultaneously rooted in tradition yet vitally progressive, in stark contrast to a model of capitalism in the United States that had crashed and burned so suddenly and traumatically after the Wall Street Crash of 1929. This period of fascination with all things Mexican in the 1930s coincided with attempts by the government of the United States to negotiate favourable economic conditions that would preserve both the land holdings of its citizens and the continued extraction of Mexican natural resources (such as oil) after the revolution. It is no coincidence that the Rockefellers (one of the wealthiest families in America and who were major patrons of Mexican art in the period) largely controlled MoMA and owned the Standard Oil Company, which made huge operating profits south of the border. In this sense, Mexican murals were embroiled in a broader negotiation between the two countries, in which the purported nationalism of the Mexican post-revolutionary governments was supposedly pitted against the direct and exploitative economic interests of their more powerful North American neighbour. You will begin this course by looking at how this conflict was played out in Rivera’s mural The History of Mexico: From the Conquest to the Future (1929–35) in Mexico City, before turning to two important commissions that Rivera undertook in the United States in the 1930s, to see how he negotiated this unequal relationship between the two countries in terms of his own personal vision of pan-Americanism. You will then finish with a brief analysis of Kahlo’s more subjectively oriented painting, as a counterpoint to the monumental public art of her husband. Here you will see that it is extra-artistic factors that all too often determine the critical reputations of artists from the past in the here and now.