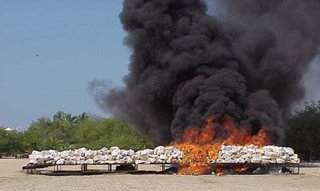 This class examines the relationship between a number of mind-altering substances and cultural processes.

We look at the relationship between drugs and such phenomena as poverty, religion, technology, inter-generational conflict, colonialism, and global capitalism. We read about the physiological and psychological effects of these substances – ranging from alcohol to LSD, cocaine and ecstasy – and ask why different societies prohibit and sanction different drugs. We examine the use of mind-altering substances in a number of “traditional” societies, and follow the development of a global trade in such substances as sugar, coffee, tea, nicotine, cocaine, and marijuana concurrent with the evolution of global capitalism. We look at the use of LSD as a mind-control substance by the CIA and as a mind-altering substance in the 1960’s counter-culture, and we look at the rise of Prozac® and Viagra® as popular, if controversial, pharmaceutical products in recent years. Finally, we evaluate America’s current drug laws.