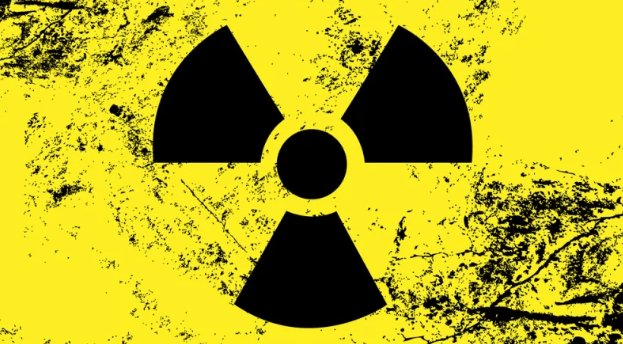 Most people fear ionizing radiation. Certainly it can cause death if we are exposed to too much, and the most recent symbol for it makes it clear to stay away from it. However, ionizing radiation, like many things, isn’t bad unless a living organism is exposed to too much of it. Ionizing radiation is any type of particle or electromagnetic wave that carries enough energy to ionize or remove electrons from an atom. There are two types of electromagnetic waves that can ionize atoms: X-rays and gamma-rays, and sometimes they have the same energy. Gamma radiation is produced by interactions within the nucleus, while X-rays are produced outside of the nucleus by electrons. There are officially two types of ionizing radiation that are energetic particles emitted during an interaction within the nucleus. The alpha particle is composed of two protons and two neutrons, or a helium nucleus

. The beta particle is either a positron or an electron. Neutrons emitted during some nuclear decay processes are often included as ionizing particles but they do not actually ionize an atom directly. Neutrons interact with another nucleus, which may result in a secondary process involving ionizing radiation. Why is ionizing radiation dangerous? When atoms in living cells become ionized one of three things usually happens – the cell dies, the cell repairs itself, or the cell mutates incorrectly and can become cancerous. Not all cells are affected by ionizing radiation in the same way. The cells that reproduce the most and are the least specialized are the most likely to be affected by ionizing radiation, for example those in a forming fetus. Radiation is effective as a cancer treatment because it can kill the cancer cells, however, it can also kill or damage nearby cells. When radiation is used to treat cancer it must be pinpointed very carefully. New technologies, similar to imaging techniques used in CT scans, called TomoTherapy help pinpoint radiation treatment. TomoTherapy allows radiologists to apply the ionizing energy directly to the perimeter and within the tumor while avoiding the healthy cells surrounding it. Some aggressive cancers, such as liver cancer, are being treated with a new internal method or radiation therapy. Sent through an artery that feeds the liver, microscopic encapsulated spheres containing radioactive isotopes get directly embedded into the liver and destroy cancer cells. Even though this type of treatment is new, internal radiation treatment is not new. Internal radiation treatment is called brachytherapy. There is background radiation all around us. Many radioactive substances exist naturally and are within Earth’s rocks and soil. Most cement, stoneware, and granite contain some radioactive particles, but the levels are not so high. Nuclear power plants utilize Earth’s natural resources. The fuel rods in a nuclear reactor are made of zirconium and pellets of naturally occurring uranium that has been processed by humans so that it contains a higher percentage of the uranium 235 isotope. This isotope occurs naturally and its nuclear decay process emits more energy. These fuel rods are placed in water and the water heats up due to the ionizing energy emitted by the nuclear decay processes that occur in the fuel rods. The heated water creates very hot (550˚F) steam. The steam pushes on a turbine, causing it to turn and as it turns electricity is generated.