Mine Ventilation Hazards and Control Training 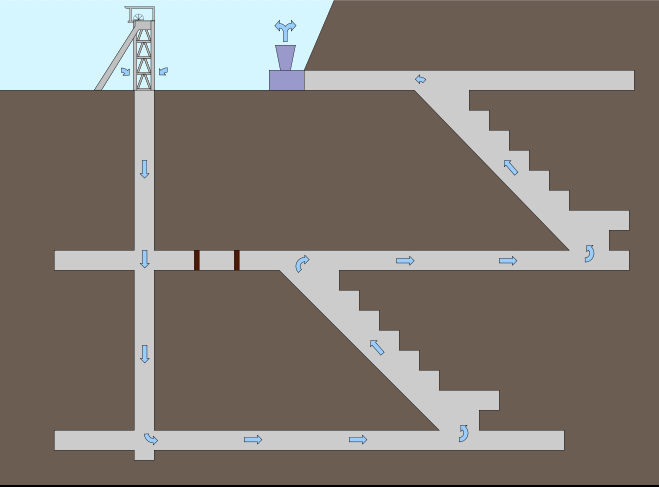 Mining, as a global industry, is being pushed constantly into more remote and challenging environments. This creates a need for innovative and adaptable methods of ventilation and cooling for the safety of the people that work in the mines.

1. The temperature in the Mine Temperature levels in underground mines range from extremity-numbing cold to such heat that dehydration can be caused in a matter of minutes by profuse sweating. Mines in Mongolia have to battle temperatures of -40 degrees Celsius while mines in Western Australia often reach into the 50s. The deeper we’re required to go for coal, shale and other valuable assets, the more difficult it becomes to manage safe heating and cooling of the mine shafts and work areas. It’s not just humans that are negatively affected by becoming sluggish in extreme heat or cold. Machinery can overheat, freeze up, or stop working altogether in such harsh environments. To ensure the safety of the miners, the highest quality of cooling equipment needs to be installed. This will allow mines to operate efficiently and at the highest possible standard’. Even the support structure of the mine itself can become compromised in these conditions leading to warping and every miner’s nightmare, collapse. 2. Heating and Cooling With such harsh conditions to deal with on a daily basis, a mining operation must design and maintain a ventilation system that can provide a constant clean air supply to all the work areas. Modern mines are going deeper and are intricately more complex than their predecessors. System maintenance usually requires a break in production, tempting team leaders to ignore or continually put it off. System overhauls are time-consuming as well as expensive, again leading to the temptation to push the luck, so to speak. Forgotten, in the push for productivity, is the fact that if the workers aren’t getting a fresh air supply, and temperatures kept at workable levels, production will stop for a much longer period of time, due to sluggishness, sickness, and possible death. 3. Methane and other Fugitive Gases When deep underground, one of the biggest hazards besides not getting enough oxygen, is the build-up of methane and other gases. Too much, without proper ventilation, leads to explosions and obviously, fatalities. Gas build-up must be monitored closely at all times with evacuation and shut down of the mine until the levels subside. 4. Diesel Particulate Matter Diesel particulate matter or DPM is a growing concern industry-wide following World Health Organisation’s June 2012 classification of DPM as a Group 1 Carcinogen. Much of the machinery used in mines is fuelled by diesel. Although diesel will burn, it has a higher flash point and doesn’t explode like other liquid fuels. However, once on fire, it can burn with fierce intensity. It’s the particulates in the exhaust that are the most dangerous, leading to lung cancer and also associated with an increase in bladder cancer among miners. 5. Poorly Trained or Untrained Employees One of the biggest hazards to any mining operation is humans. People make mistakes and poorly trained or untrained employees make more mistakes, often with the high cost of lost productivity or worse, loss of life. Yet, many mining operators, in an effort to keep productivity high, will add to their labour force without doing due diligence or providing thorough training. In the long run, this is a shortsighted method of doing business.

Innovative engineering for designing and maintaining ventilation systems is a must in today’s deep intricate mines. The maintenance team and the mining crews need to communicate and work together. Making sure to run the ventilation system in the proper areas of the mine requires meetings and updates as to movements below ground. In other words, everyone has to be in the same shaft. Ventilation-on-demand devices are extremely useful tools in mines of all sizes as are readily available emergency breathing apparatuses. Of equal importance is valuing the employees enough to train them properly. A mining operation that recognizes its human resources as living breathing people, with a life outside the mine, is more likely to be on the cutting edge of innovation and strive to continually run a safe operation. When people know their safety matters, they tend to work with genuine effort directed toward productivity. Course Content